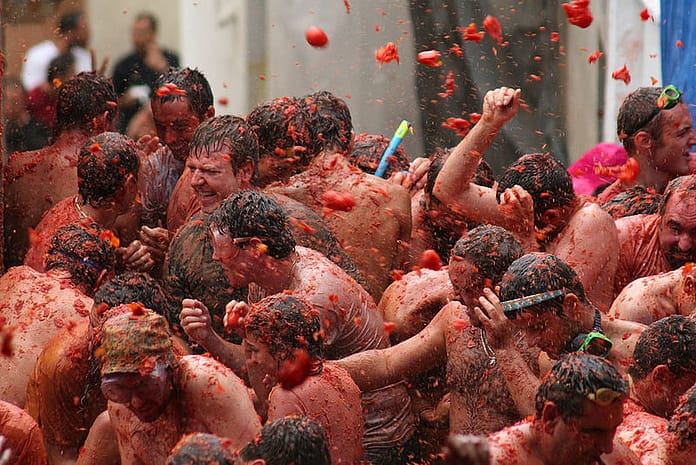 La Tomatina is a food fight festival held on the last Wednesday of August each year in the town of Buñol in the Valencia region of Spain. Tens of thousands of participants come from all over the world to fight in a brutal battle where more than one hundred metric tons of over-ripe tomatoes are thrown in the streets.

The week-long festival features music, parades, dancing, and fireworks. On the night before the tomato fight, participants of the festival compete in a paella cooking contest. It is tradition for the women to wear all white and the men to wear no shirts. This festival started in a casual way in 1945, but wasn’t officially recognized until 1952.

Approximately 20,000–50,000 tourists come to the tomato fight, multiplying by several times Buñol’s normal population of slightly over 9,000. There is limited accommodation for people who come to La Tomatina, and thus many participants stay in Valencia and travel by bus or train to Buñol, about 38 km outside the city.

WHEN: Last Wednesday of August Each Year

This article is part of an ongoing series of posts highlighting significant festivals throughout the world, typically held during limited periods of time during the year. The series will identify and profile a select number of world festivals for nomination, ultimately selecting 15 worthy of the title “Top 15 Greatest World Festival”.
Facebook
Twitter
Pinterest
WhatsApp
Previous articleWorld Cup Bound! Third Times A Charm
Next articleRio Carnival :: God Made Glitter For Brazilians