As noted earlier, Thailand is covered extensively with temples and they can literally be found on nearly every street corner. Having initially experienced temples in Thailand, we were interested to see what temples were like in Chiang Mai, the former capital of Thailand. 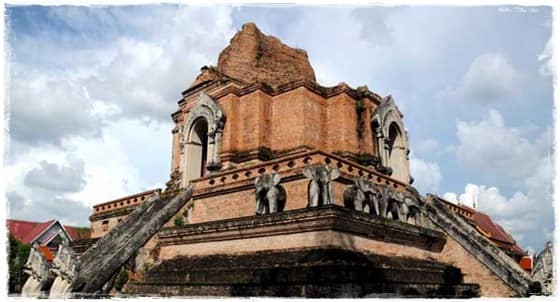 Temples in Chiang Mai at least by appearance provide a greater historic quality, closer to original construction and with more disrepair than most temples in Bangkok. I think we enjoyed the more rustic appearances, especially since it contrasted with what we had already seen.

Unlike Bangkok, Chiang Mai also has a very soft side, with a laid back attitude and a more relaxed and slow pace. We actually rented a bicycle for the day, yes one bicycle, Manali on the back, and past the first apprehensive moments was just fine riding through the city trailing through cars, trucks and the like. People seemed a little bit friendlier and outgoing here in Chiang Mai as well. In Bangkok, you have to maintain skepticism in everything you are told, as someone is constantly trying to get one over on you. Don’t fear, as if you do fall victim it is not for more than a couple of dollars, but still the principle matters, and the diligence and scrutiny required to repel that kind of deviant behavior is tiring. We really relaxed and let our guard down in Chiang Mai, and the people, the local culture and their attitudes of generosity, honesty and kindness were completely responsible.

Possibly due to the more relaxed nature of Chiang Mai, we were able to experience a Monk chat, which we had been keeping our eyes out for, and may just not have noticed in Bangkok. It is likely you will be able to find an easily accessible Monk to chat with wherever you are located in Chiang Mai, as they seem very prevalent. We stayed within the city walls, so for sure with that geography we noticed many temples advertising, in English, monk chats. So why offer such a thing? Well, it is mainly so these Monks, who are scholars, in addition to religious devotees, to learn English. Perhaps it is just a personal interest for some, but others see it as a continuation of their learning and enlightenment.

Manali and I took the time to sit down with Monk Lung, who was originally from Cambodia. We discussed our different cultures, personal philosophies and got to understand a bit about what makes up a typical day in the life of a Monk. Our conversation was great, as our Monk was a self confessed rebel of sorts, and conversing came easy. We felt comfortable to ask anything and everything, and Monk Lung really gave us a surprise when he proclaimed that he had a Facebook account!

Fancy a chat with a Monk of your own? Just look for the signs displayed prevalently the courtyards to any of the temples. Happy chatting!